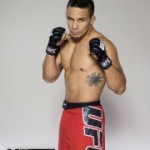 series The Ultimate Fighter (TUF).  The winner of TUF 14 Finale will receive a contract to fight in the UFC.  Bermudez won his semi-final bout over Akira Corassani by forcing a first round submission via guillotine choke.  TUF 14 Finale takes place on December 3, 2011 at the Palms Casino Resort in Las Vegas, Nevada.  Good luck to Dennis….the entire Section 9 wrestling community will be rooting for you!