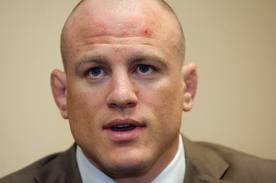 According to Intermat, 2004 Olympic gold medalist Cael Sanderson has decided not to make a run at another medal at the 2012 London Olympics.  Sanderson, who is also the head coach of the 2X defending NCAA champion Penn State Nittany Lions, was a 2011 World Team member.  He finished 5th at the World Championships in Turkey and has not competed since.  Click here for the Intermat story.