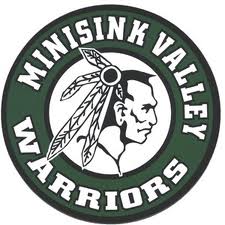 In one of the most exciting dual meets of the year, Minisink Valley defeated Warwick 34-33 (criteria 8 matches won) on the last day of regular season wrestling in Section 9!  Warwick had a 33-30 lead going into the final match of the evening where defending Section 9 champion Pavel Gorelov of Warwick was set to take on Minisink’s Anthony Sannella at 195 pounds.  Sannella weighed in at 182 but was forced to bump-up to take on Gorelov in what proved to be an extremely exciting match.  In the end, Sannella was able to hold off Gorelov to earn a 6-5 victory and secure the victory for Minisink.  In the other marquee match-up of the evening, Warwick 7th grader Ryan Ferro was able to convert a 3rd period reversal into a pinfall to defeat Minisink’s Mason Rambrose at 113 pounds.  Congratulations to both teams for having phenomenal regular seasons….both MV and Warwick, along with Monroe Woodbury, have been ranked in the top 20 in NYS all season long!  Next stop….the Section 9 Championships!  Check back for schedule and seeds as they become available.

In the other match scheduled for Friday, Cornwall was able to defeat Monticello by a score of 66-12.  It the most anticipated match of the evening, Monticello’s Paul Gomez was able to hold off Cornwall’s Brett Johnson for a 11-8 victory at 126.

Wednesday’s team scores and individual results will be posted as they roll in!!!